We have been researching how and why an organization integrates behaviors and actions that introduce “Risk” to an organization. We feel this is critical because it has significant impact on growth and profitability.

Two LinkedIn posts offer very different perspectives. The first post is by Sir Martin Sorrell, Founder and CEO of WPP and is titled, Want Success? Think Long-Term and Take Risks. Sorrell suggests that long term thinking and smart risk taking in many large corporations has lost out to an emphasis on retaining earnings and a “bunker mentality” emphasizing maintaining the status quo and avoiding risky ventures.

The second post is by Rob Alston, CEO of Access, and is titled, Company Culture Improvements in 4 Not-Exactly-Easy Steps. His post described how Access intentionally opened their “Pandora’s Box” by conducting a company-wide survey on benefits and how that led to significant and beneficial changes for everyone.

In both cases responding to a disruption resulted in the ensuing behaviors and outcomes. In Sir Martin Sorrell’s post, the post-Lehman meltdown, the geopolitical turmoil created by Brexit, and increased global instability made C-suite decisions less about taking smart risks and seizing the future and more about surviving persistent uncertainty.
Access, on the other hand, sought feedback from the employee survey as an opportunity to proactively confront the issues that could hold the company back from leveraging the commitment of everyone as new opportunities emerged. 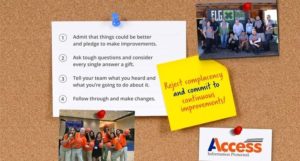 Access modeled a willingness to take a risk across the entire company as demonstrated in their four “steps” to improving corporate culture (shown in the graphic). Each step is a clear commitment to total engagement with each and every employee – from asking tough questions to receiving tough feedback through the resulting actions taken to make a change (or shift a pattern).

These different perspectives illustrate several different aspects of the Complexity Space™ Framework. The CSF focuses attention on the patterns of thought and action in organizations. It recognizes that in complex systems, how risk is managed has implications for both the short and long term health of the organization.

To the extent the “Four Questions” are actually implemented, our belief is that Access was trying to reinforce a core dimension in their “organizational ecosystem” — a clear commitment to total engagement with each and every employee. It seems to be working — the results for Access have been significant, an average growth rate of 44% per year over the past seven years.

In the Complexity Space Framework, our definition of Motivation is: What was the “attractor” that brought the organization into existence? What is the “glue” that holds it together today? Sir Sorrell’s post suggests that the motivation of maintaining the status quo results in an aversion to making the type of investments in innovations and change that prepare the organization for the future.

Mr. Alston highlights a different motivation, one built around the sticky note posted on the bulletin board in the graphic above: “Reject complacency and commit to continuous improvements!”

What motivates your organization to take a risk?